How to make sense of the AS4187 categorisation of product families 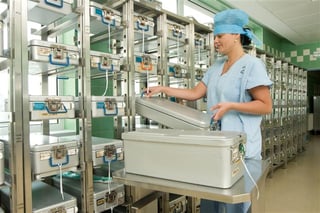 The standard states that the method used to classify an RMD into a product family shall be documented.

RMD’s can be grouped into Product Families based on:

The idea being that an RMD or set of RMD’s (Tray) is exposed to a re-processing regime that ensures that it can be safely and effectively reprocessed.

However, the standard offers no guidance on how to classify product families except that it makes reference to ISO/TS 17665-3:2013 - Sterilization of health care products - Moist heat - Part 3: Guidance on the designation of a medical device to a product family and processing category for steam sterilization.

While ISO/TS 17665-3 Part 3 provides excellent guidance on how to do this, it is still a complex document so the purpose of this blog is to provide an overview of the standard and hopefully shed some light on the classification process, so that when you pick up the standard you will find a degree of familiarity with the terminology and process.

Classification is done based on the four General Attributes of an RMD and each attribute is given a unique code.

The design of an RMD varies significantly. For example: "Is it hollow?" or "Does it have pins and box joints or does it have moving parts?". The standard breaks up RMD design into seven design elements and assigns a code to each.

Material is easy because there are only two material elements.

Weight is also fairly straight forward as determining the weight on an RMD is a technical exercise.

So in a small day surgery, a bowl may be sterilised un-wrapped in a bench top sterilizer and would have an SBS attribute of ‘d1’

If our needleholder on the other hand was wrapped in a single pouch, it would have an SBS attribute of ‘d2’

So this is what we have so far:

There are 8 levels of Steam penetration resistance from 1 to 7, anything higher is grouped as 7+

Once the Steam penetration resistance is estimated, the RMD is given a unique Product Family Number.

Because steam penetration resistance is a subjective estimation, the way one sterilizing department categorises RMD’s may be quite different to another.

While AS/NZS 4187 may not provide guidance on product families it does state that the method used to classify an RMD into a product family shall be based on similar attributes to those discussed above and should be documented.

It also states that reference should be made to the manufacturer’s instructions.