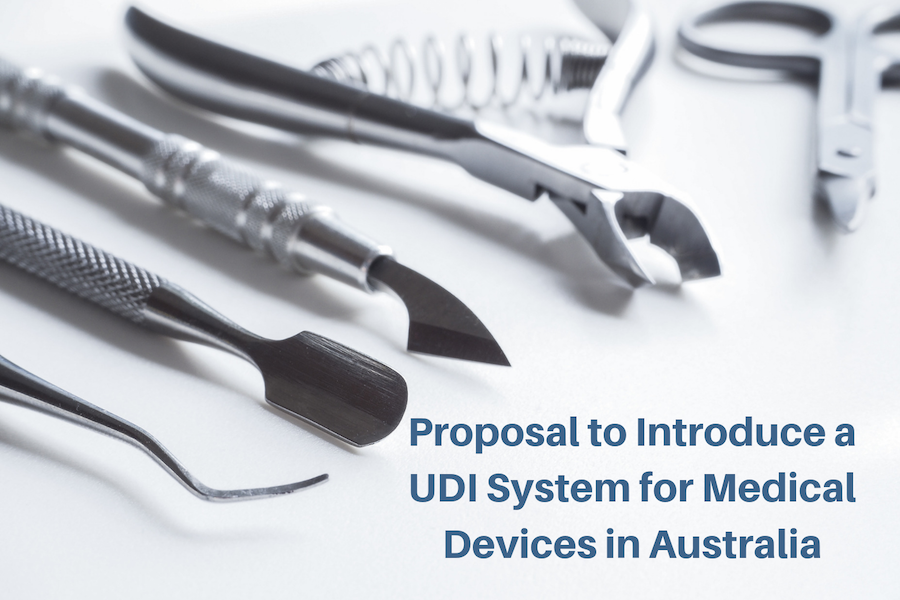 In July 2018 I published a blog about being ready for unique surgical instrument identification (UDI) and its implications for Australia and New Zealand.

Since then, the therapeutic goods administration (TGA) in Australia has released a consultation paper relating to the implementation of UDI.

The purpose of this blog is to look at the document and provide an update on what’s happening with the implementation of UDI in Australia.

On January 7th 2019, the TGA published a Consultation seeking feedback on the proposal to introduce a unique device identification (UDI) system for medical devices in Australia. The consultation closed on 18th February 2019.

The purpose of the consultation is to seek community feedback on the implementation of a globally harmonised UDI system in Australia.

In keeping with the first part relating to the adoption of globally harmonised standards, the consultation provides an overview on international activities relating to the UDI system.

In particular, it notes the guidance published by the International Medical Device Regulators forum (IMDRF) and the experiences in the US and the European Union.

To that point it goes on to say, ‘We propose that the UDI System in Australia be based on internationally harmonised principles as outlined in IMDRF UDI Guidance and informed by the work done by the EU, the U.S. FDA and other regulatory authorities.’

The Principles of the UDI system for Australia

What is the timeline for Australia to implement UDI?

Therefore, the timetable for implementation will be the same as it is for Europe. This is interesting given that the European Union has a 2-year head start on Australia. The EU enacted their regulations in April 2017.

Article 123(3) of the EU Regulations provides that UDI carriers must be placed on the label of the device and on all higher levels of packaging for:

For reusable devices that must have the UDI carrier on the device itself, the requirement is imposed from two (2) years after the date referred to above.

This is what it means for Australia:

By May 26th, 2021 manufacturers and importers of implantable and Class 3 devices must comply with Australian UDI requirements.

By May 26th, 2023 manufacturers and importers of Class 2a and 2b devices must comply with Australian UDI requirements.

By May 26th, 2025 manufacturers and importers of Class 1 devices (re-usable medical devices) must comply with Australian UDI requirements.

By May 26th, 2027 manufacturers and importers of Class 1 devices (re-usable medical devices) must comply with Australian UDI requirements for direct part marking on the device itself.

At this point New Zealand doesn’t appear to have to have moved any further on UDI. Or, perhaps, it's just that nothing more has been published on the Medsafe website.

In my last blog I noted that Medsafe makes reference to the Global Harmonisation Task Force (GHTF) final document GHTF/SG1/N43:2005

‘Medsafe recommends that sponsors and manufacturers apply the guidance contained in this document when developing their labelling and instructions for use.’

It would appear, still, that New Zealand will adopt UDI at some time in the future.

The purpose of the TGA consultation paper released on January 7th, 2019 was to seek feedback on the proposed implementation of UDI in Australia. The consultation closed on 18th February 2019.

The TGA seeks to implement a system and timeframe consistent with the EU system.

On April 4th, 2019, the TGA released a paper titled, ‘An Action Plan for Medical Devices’.

This document sets out a 3-pronged strategy to reform the regulation of medical devices in Australia.

Strategy 1: Improve how new devices get on the market

Strategy 2: Strengthen monitoring and follow-up of devices already in use

Strategy 3: Provide more information to patients about the devices they use.

Interestingly, it sets a time table of early 2020 for Government to introduce legislation to implement the regulatory changes under Strategy 2.

Given this, we should know early 2020, exactly how UDI will be implemented in Australia.