How to prevent laser etching from compromising infection control

Optimising the Lifespan of Surgical Instruments 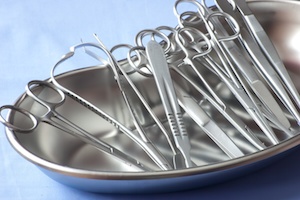 Laser etching of surgical instruments with 2D Data Matrix barcodes is increasingly being considered by healthcare facilities.  These laser markings facilitate individual level instrument tracking, quick identification and assembly of instruments sets. However studies have shown that marking of stainless steel alters the surface composition and degrades the natural passive layer resulting in a mark that is  susceptible to corrosion. When this happens, both infection control and the lifespan of your surgical instruments are compromised. Indeed stories frequently circulate through medical instrument circles about instruments rusting and needing to be destroyed.

So let's have a look at what it is all about and what you can do to limit or prevent the detrimental effects of laser etching on surgical instruments.

Stainless steel is corrossion resistant due to a chromium rich oxide film which forms naturally on its surface. This film is generally referred to as the ‘passive layer’ and the amazing thing about it is that, not unlike human skin, it is ‘self-repairing’. For example, polishing the surface of a surgical instrument will destroy the passive layer, but simply washing the instrument, drying it and exposing it to oxygen again will naturally regenerate it.

In a process similar to welding, the laser etching process applies heat to etch the mark into the surface of the instrument. During this process the chromium-enriched passive layer is damaged and iron contained below the layer is exposed making the surface susceptible to corrosion. Simply washing and drying the instrument will no longer regenerate the passive layer.

To restore this passive layer, the surface iron must be removed without removing the corrosion resistant chromium and nickel elements. This can be achieved by a process called ‘passivation’.

The passive layer is establised in the upper part of the surface by exposing it to nitric or citric acid. This removes the iron and raises the chrome-to-iron ratio. Pre-cleaning by way of ultrasonic cleaner is recommended prior to the passivation process for optimum results.  The chemical process will dull the black mark from the surface. The challenge with passivation is to restore the passive layer without degrading the mark to a point that it becomes unreadable by scanning devices.

Precise process controls are essential to ensure both passivation and readability. The international standard ASTM A967 / A967M - 13 Standard Specification for Chemical Passivation Treatments for Stainless Steel Parts provides guidance on how to design and monitor such controls.

Passivation has increased complexity to the marking process.  The process demands the use of potentially dangerous chemicals and process controls  which raises concerns as to its DIY suitability.  A qualified surgical instrument maker with experience in metallurgy may be a better alternative and enhance the utilisation rate on your medical assets.

Where to Position Laser Markings on Surgical Instruments

Placement of the mark on the surgical device is a critical consideration as incorrect placement can lead to fatigue corrosion. For example marks should never be placed on working areas like box joints.

The Laser etching process has long been considered as something that can be done ‘in house’ by existing staff but the passivation process raises serious doubt to its DIY suitability as it requires potentially dangerous chemicals which raises significant health and safety concerns.

This is not to say that it is an impossibility, only that the process is no longer as straight forward as once thought and consideration should be given to seeking advice from a qualified surgical instrument maker.