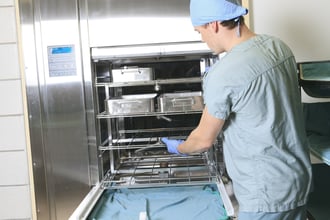 The new version of AS/NZS4187 released on the 15th December last year, contains a number of differences in terminology to the previous version. The new standard also uses abbreviations.

This blog contains a list of the abbreviations and their meanings and looks at some of the important differences in terminology.

The new version of the standard makes significant use of abbreviations so it’s a useful to have an understanding of what they mean.

The new version of the standard has a significant amount of new and changed definitions to the old standard. Some of the most significant changes are described below.

The previous standard used a number of definitions including ‘instruments’, ‘equipment’, medical device’ and ‘items’ to describe objects that are reprocessed for use in a surgical procedure.

This has been simplified in the new standard which simply uses RMD.

‘Strategy for reprocessing contaminated medical devices. The system classifies a medical device as critical, semi-critical, or non-critical on the basis of risk to patient safety from contamination on a device.’

The new standard adopts the Spaulding classification as a methodology to categorise medical devices for the purposes of reprocessing.

The previous standard did make mention of critical, semi-critical and non-critical, however the new standard brings these together under the banner of the Spaulding classification.

‘A separately constituted health service that is responsible for the clinical governance, administration and financial management of a service unit(s) providing health care.’

The previous standard used ‘Heath Care Facility’ for defining the applicability of the standard. However office based practises performing ‘non-complex’ procedures where covered by AS4815.

The new standard clearly removes the ‘non-complex procedure’ distinction that separates office based facilities and defines a HSO as:

‘…. a service unit involves a grouping of clinicians and others working in a systematic way to deliver health care to patients and can be in any location or setting, including pharmacies, clinics, outpatient facilities, hospitals, patients’ homes, community settings, practices and clinicians’ rooms.’

This would appear to rescind AS4815 as the applicable standard for office based Health care facilities.

‘A process in which sterilized RMDs are transferred aseptically to the sterile field in the shortest practicable time after removal from the sterilizer.’

The previous standard warned that unwrapped sterilized instruments are exposed to a higher risk of contamination if not used immediately after flash sterilization.

The new standard however, defines a detailed process specification and has a mandatory requirement that ‘An RMD that is sterilized without an SBS is at risk of contamination during transfer to the aseptic field and shall be used immediately.’

Check out our new guide:

‘Groups or subgroups of product characterized by similar attributes such as mass, material, construction, shapes, lumens, SBS or packaging system and which present a similar challenge to the cleaning, disinfecting and/or sterilizing processes.

This is an entirely new addition and did not exist in any form in the previous standard.

See my blog for more information on product families.

The above definitions represent just a section of the total in the new standard; the intention here however is only to provide a brief introduction of the most significant definitions and their meanings and how they may or may not be related to definitions in the previous standard.